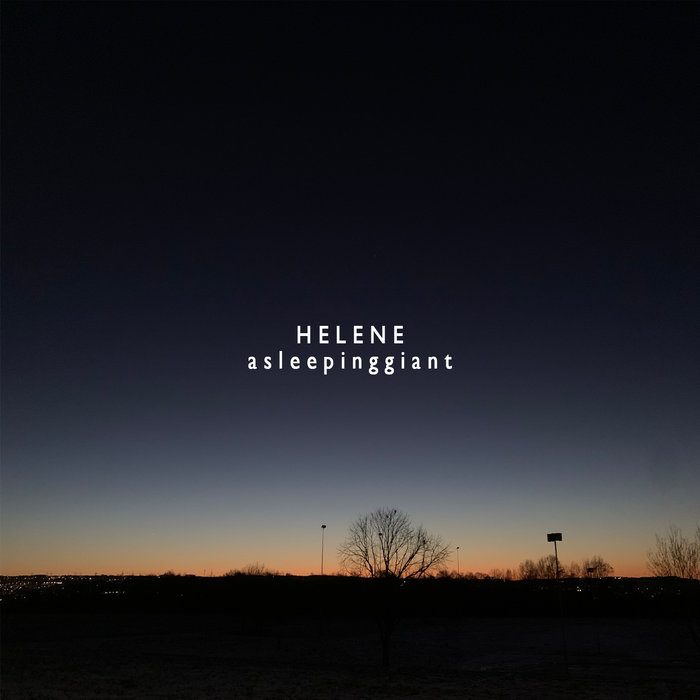 Ryan ‪Helene has such a beautiful power and poignancy ebbing and flowing through it. So many gentle moments of sonic catharsis pushing through clouds of quietude. With waves of ambient space to induce elegiac reflection, it’s an album that reveals and imparts a deep empathy.

Sometimes music evokes feelings and feelings in turn evoke music. I have always tried to put as much of my feelings as possible into my music. I want to tell stories or rather make untold stories heard.

This whole album is based around death, loss, grief and despair. While most of the tracks were made a few months ago, after the untimely passing of my mother I felt I needed to make some more music just to try and cope with the situation. This how the title track and "We are all ghosts" came into place. The latter of those tracks features a short poem by Thomas Mathie which I also included in a farewell letter to Mum.

Helene was my mother's middle name and so I felt it was appropriate to name the album after her. It features a very reduced setup, consisting of Android apps, my electric guitar, field recordings of a nearby forest or my cat's purring as well as my air conditioning.

I'm sure my mother wouldn't have liked my music itself but she would be quite content with me doing what I like and maybe being there for others as well.

When Ben Room approached me with a demo, I was intrigued. I had recently reconnected with Ben and was interested in hearing what he had composed. I was absolutely delighted to note the album he had sent on hit the right spot in terms of what I look for with weareallghosts and emphatically agree to release what he had submitted.

Then tragedy struck and Ben's mother passed away. I was rather moved by the tribute Ben gave his mother and, inspired, I penned a short poem for him as a way to give my condolences. Not only did Ben read this poem at the Service of Remembrance held for his mother, he has incorporated it into the album you have in front of you, "Helene (waag_rel151)".

We all handle death and loss and grief in different ways ... and I greatly admire Ben for channelling all these feelings into this album, especially the title track, "Helene", an engaging 22-minute longform ambient piece ... and "We are all ghosts", where Ben recites the poem I sent him accompanied by a deeply layered and discordant soundscape that is expertly overlaid with birdsong and other found sounds.

I really hope this album speaks to you as it has done me?

As before, a 320kbps version of this release will be available, for free, over on Archive (archive.org/details/we-are-all-ghosts) with a lossless version available here on Bandcamp for ‘pay what you want’.

Music by Ben Room aka asleepinggiant
Design & Logistics by Thomas Mathie for weareallghosts.co.uk

This album is dedicated to Helene